MONTREAL, Sept. 18, 2017 /CNW Telbec/ - Air Canada continues to support relief efforts in areas affected by the passage of Hurricane Irma by dispatching a humanitarian flight with relief supplies on Saturday September 16, 2017. Since September 5, Air Canada has operated a total of 30 additional flights, as well as larger aircraft with more seats, to bring over 7,000 customers home early from the affected areas including Antigua, Cuba, Turks and Caicos, Haiti, Dominican Republic and Florida. 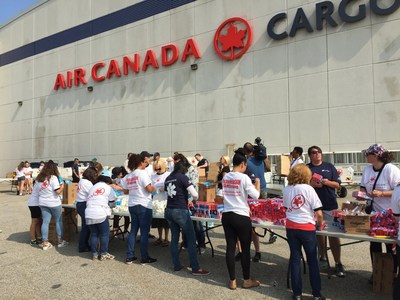 Flight AC7060 departed Toronto without passengers for Providenciales, Turks and Caicos Saturday with 5,000 Kg of humanitarian aid in its cargo hold. The freight included tarps for the Red Cross, infrastructure equipment such as wiring, ropes and power tools from Canadian Niagara Power as well as water purification kits to provide families with fresh drinking water for GlobalMedic. The cabin had over 180 liters of water secured in seats with netting. The return flight evacuated 61 Canadians from the island on the last regular flight as the airline is temporary suspending service.

This past weekend, Air Canada's regularly scheduled flight to Antigua carried a full load of 400 kg of cargo including 360 liters of water as well as GlobalMedic humanitarian aid including much needed plywood.

Also on Saturday, 40 Air Canada Foundation employee ambassadors and family members rallied with GlobalMedic volunteers to package emergency kits for families in areas affected by Hurricane Irma. Air Canada employees packed 1,000 kits containing hygiene supplies and water purification systems that will be transported using cargo space donated by the airline to help more than 3,000 people. Employees hand wrote on every box a message of hope. Approximately 110 kits were sent on Monday, September 18 to Grenada. The rest of the supplies will be sent on other flights to the Caribbean including St. Lucia, Antigua, Cuba and will also be distributed to neighbouring islands such as Tortola, Sint Maarten and Anguilla.

"On behalf of the more than 30,000 employees of Air Canada, I want to extend our thoughts and condolences to those affected by this terrible catastrophe," said Calin Rovinescu, President and CEO of Air Canada. "Throughout our history, it has been important for Air Canada to offer support and be an active participant in international humanitarian relief activities. Since the tragic hurricane last week, we have worked hard with our relief partners to ensure that all supplies transported were successfully delivered to areas ravaged by Hurricane Irma."

In addition, The Air Canada Foundation donated tickets to GlobalMedic's RescUAV program. This program sends drones and their pilot to provide aerial imagery of disaster affected buildings, detect signs of human life beneath the rubble, and relay information in real-time to responders on the ground to identify hazards, damaged infrastructure, and access issues to reaching communities in need. This response allows rescue teams to work faster and more effectively to save lives.

Air Canada is Canada's largest domestic and international airline serving more than 200 airports on six continents. Canada's flag carrier is among the 20 largest airlines in the world and in 2016 served close to 45 million customers.  Air Canada provides scheduled passenger service directly to 64 airports in Canada, 57 in the United States and 96 in Europe, the Middle East, Africa, Asia, Australia, the Caribbean, Mexico, Central America and South America. Air Canada is a founding member of Star Alliance, the world's most comprehensive air transportation network serving 1,300 airports in 191 countries. Air Canada is the only international network carrier in North America to receive a Four-Star ranking according to independent U.K. research firm Skytrax, which also named Air Canada the 2017 Best Airline in North America.  For more information, please visit: www.aircanada.com, follow @AirCanada on Twitter and join Air Canada on Facebook. 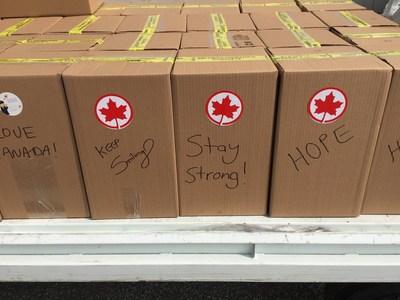