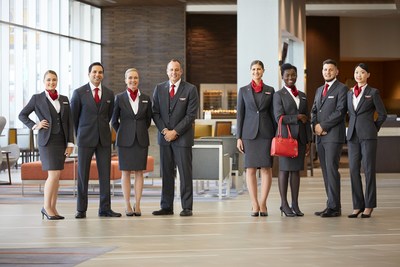 MONTREAL, Feb. 1, 2018 /CNW Telbec/ - Air Canada today was named one of "Montreal's Top Employers" for the fifth consecutive year in an annual employer survey by Mediacorp Canada Inc. The 2018 survey recognizes companies in Montreal with exceptional human resources programs and forward-thinking workplace policies which included a detailed review of company operations and Human Resources practices, including a comparison of others in their industry and region.

"Air Canada is a global company headquartered in Montreal with over 10,000 employees in the area, and we're honoured to be named among the top employers in Montreal for the fifth consecutive year. The recognition for being an employee-focused place to work with a wide range of interesting careers, growth opportunities, top training programs, unique and desirable benefits, and community involvement possibilities helps us attract and retain the best and the brightest people as we continue achieving new heights on our journey towards becoming a global champion in our industry," said Arielle Meloul-Wechsler, Senior Vice President, People and Culture at Air Canada. "Air Canada has long been regarded as a progressive employer and on average, we receive more than 390 applications for each job we fill."

Top Montreal Employer Award
Mediacorp cited several unique employee support and engagement programs at Air Canada. These include: state-of-the-art training facilities; generous discounts and perquisites for employees and their families; programs to promote health, fitness and wellness; and a consultative approach to workplace developments, such as recent head office renovations where Air Canada sought employee feedback on everything from storage space design to the final décor.

Working at Air Canada
Air Canada's reputation as one of Montreal's top employers has made the airline a destination of choice for people seeking a challenging career. It receives 56,000 visits each month to the employment page of its website and on average there are 390 applicants per position for each vacancy filled.

In addition to being named one of Montreal's Top Employers for 2018, Air Canada has received other recent recognitions for employee relations and engagement including being named:

Additional information on Air Canada's Human Resources is in the "Employees" section of our 2016 Corporate Sustainability Report at: https://www.aircanada.com/ca/en/aco/home/about/corporate-responsibility/corporate-sustainability-reports.html#/par2_accordion

Air Canada is Canada's largest domestic and international airline serving more than 200 airports on six continents.  Canada's flag carrier is among the 20 largest airlines in the world and in 2017 served approximately 48 million customers.  Air Canada provides scheduled passenger service directly to 64 airports in Canada, 60 in the United States and 98 in Europe, the Middle East, Africa, Asia, Australia, the Caribbean, Mexico, Central America and South America. Air Canada is a founding member of Star Alliance, the world's most comprehensive air transportation network serving 1,300 airports in 191 countries.  Air Canada is the only international network carrier in North America to receive a Four-Star ranking according to independent U.K. research firm Skytrax, which also named Air Canada the 2017 Best Airline in North America.  For more information, please visit: www.aircanada.com/media, follow @AirCanada on Twitter and join Air Canada on Facebook.