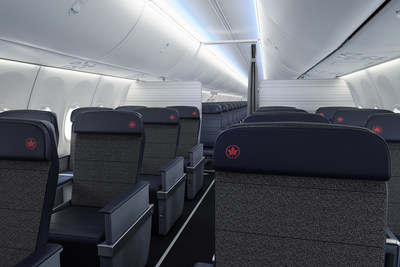 "Capitalizing on the growing traffic between Canada and Ireland, we are pleased to inaugurate Montreal-Dublin flights," said Benjamin Smith, President Passenger Airlines at Air Canada. "Air Canada will offer the best market coverage of any carrier between Canada and Ireland with service between three Canadian hubs and two Irish destinations. This includes new Toronto-Shannon flights, up to daily non-stop Toronto-Dublin service, as well as seasonal non-stop Vancouver-Dublin service."

"The accelerated development of our air service in recent years has made Montréal-Trudeau a much more strategic hub – a hub for international aviation. With recent additions such as Shanghai, Algiers, Tel Aviv, Lima, Tokyo and today, Dublin, Air Canada is listening to Montrealers and constantly offering them new and popular destinations. The Irish community in Montreal is not only large but it has a considerable influence on the city's cultural life. Many passengers will be able to benefit from this direct link this summer," said Philippe Rainville, President and Chief Executive Officer of Aéroports de Montréal.

"I am delighted to welcome the launch by Air Canada of its new non-stop service from Montreal to Dublin. This new service will greatly enhance and widen the air connectivity between our two countries. I have no doubt that it will further boost the strong growth in business and leisure tourism between Ireland and Canada," said the Ambassador of Ireland Jim Kelly.

Dana Welch, Tourism Ireland's Manager in Canada, said: "We are excited about the launch of the new Air Canada route between Montreal and Dublin. Tourism Ireland looks forward to continuing to work closely with Air Canada and the Dublin airport to support demand for this route. As an island destination, the importance of convenient, direct, non-stop flights cannot be overstated – they are absolutely critical to achieving growth in inbound tourism."

Air Canada has configured its Boeing 737 MAX with two cabins of service: Premium Economy and Economy. Features of the new aircraft include:

Air Canada, Air Canada Rouge and its regional airline partners flying under the Air Canada Express banner operate on average approximately 2,400 flights per week between Montreal and 97 destinations: 26 in Canada, including 9 in Quebec, 23 in the United States, 26 in the Caribbean, Central America and Mexico, 16 in Europe, one in China, one in Japan two in North Africa, one in the Middle East and one in South America.

About Air Canada
Air Canada is Canada's largest domestic and international airline serving more than 220 airports on six continents.  Canada's flag carrier is among the 20 largest airlines in the world and in 2017 served more than 48 million customers.  Air Canada provides scheduled passenger service directly to 64 airports in Canada, 59 in the United States and 98 in Europe, the Middle East, Africa, Asia, Australia, the Caribbean, Mexico, Central America and South America. Air Canada is a founding member of Star Alliance, the world's most comprehensive air transportation network serving 1,317 airports in 193 countries.  Air Canada is the only international network carrier in North America to receive a Four-Star ranking according to independent U.K. research firm Skytrax, which also named Air Canada the 2017 Best Airline in North America.  Air Canada was also named the 2018 Eco-Airline of the Year by the respected airline industry publication Air Transport World for its commitment to emissions reductions. For more information, please visit: aircanada.com/media, follow @AirCanada on Twitter and join Air Canada on Facebook.

For further information: Isabelle Arthur (Montreal), Isabelle.arthur@aircanada.ca, 514 422-5788; Peter Fitzpatrick (Toronto), peter.fitzpatrick@aircanada.ca, 416 263-5576; Angela Mah (Vancouver), angela.mah@aircanada.ca, 604 270-5741
We have detected a device type and/or operating system version that may result in slow performance on this site. If you are experiencing problems, please try our mobile app Opens in a new windowExternal site which may not meet accessibility guidelines..