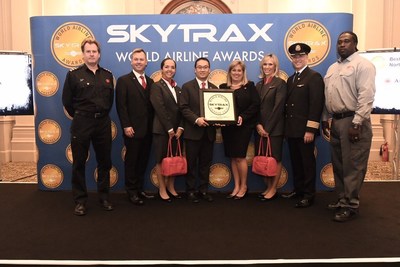 MONTREAL, July 17, 2018 /CNW Telbec/ - Air Canada was named Best Airline in North America for the second consecutive year at the 2018 Skytrax World Airline Awards ceremony held today in London. It is the seventh time in the past nine years the carrier was selected as the best in North America by the World Airline Awards, which are based on passenger satisfaction surveys of approximately 20 million global travellers.

"We are very pleased that Air Canada has again been recognized as the Best Airline in North America by the highly respected Skytrax World Airline Awards. This is the seventh time in nine years Air Canada has been honoured with this award, demonstrating our successful transformation into a leading global carrier. I thank our 30,000 employees who are the true winners of the Skytrax Award, for delivering superior service while transporting more than 48 million customers a year safely to their destinations," said Calin Rovinescu, President and Chief Executive Officer of Air Canada.

"This award shows that our customers, whom we thank for their continued loyalty, appreciate the investments Air Canada is making to deliver service that is the best in North America and increasingly recognized as industry-leading globally. This includes ongoing investments in customer service training, as well as our fleet renewal program, our strategic global network expansion, and the recent launch of Air Canada Signature Service, an end-to-end premium travel experience," said Benjamin Smith, President, Airlines and Chief Operating Officer at Air Canada. "I also thank our employees for their unwavering commitment and together, we look forward to introducing further enhancements for customers, such as the current roll-out of satellite Wi-fi on our widebody fleet, the delivery of the new Airbus A220-300 (formerly known as the Bombardier C Series) aircraft next year, and beyond that the launch of our new loyalty program, which will offer additional earning and redemption opportunities through an advanced digital experience."

Edward Plaisted, CEO of Skytrax, said: "Air Canada achieved a remarkable success winning this top accolade as the Best Airline in North America for the seventh time. Air Canada demonstrates that it is truly a passenger favourite as it continues to receive such a vote of confidence from customers."

Since 2010, Air Canada has embarked on a $10 Billion capital expenditure program to elevate the travel experience which has included:

Celebrating their 18th anniversary, the World Airline Awards are independent and impartial, and was introduced in 1999 to provide a customer satisfaction study that was truly global. Skytrax pay all costs of the Survey and Awards event. Airlines do not pay any survey entry or registration fee, and the awards event is free to attend. There are no charges for airline use of the award logos and results. Over 100 customer nationalities participated in the survey with 20.36 million eligible entries counted in the results. All survey entries were screened to identify IP and user information, with duplicate, suspect or ineligible entries deleted. 335 airlines are featured in the survey results. The online survey operated from August 2017 to May 2018, together with invitations sent to previous year respondents in the survey database (total 24.45 million customers). Customer survey forms were offered in English, French, Spanish, Russian, Japanese and Chinese. The highest nationality increase in the 2018 survey was Chinese customers with an additional 3.5 million entries.

About Air Canada
Air Canada is Canada's largest domestic and international airline serving more than 220 airports on six continents.  Canada's flag carrier is among the 20 largest airlines in the world and in 2017 served more than 48 million customers.  Air Canada provides scheduled passenger service directly to 64 airports in Canada, 59 in the United States and 98 in Europe, the Middle East, Africa, Asia, Australia, the Caribbean, Mexico, Central America and South America. Air Canada is a founding member of Star Alliance, the world's most comprehensive air transportation network serving 1,317 airports in 193 countries.  Air Canada is the only international network carrier in North America to receive a Four-Star ranking according to independent U.K. research firm Skytrax, which also named Air Canada the 2018 Best Airline in North America.  Air Canada was also named the 2018 Eco-Airline of the Year by the respected airline industry publication Air Transport World in its 44th Annual Airline Industry Achievement Awards for its commitment to emissions reductions through supporting the development of alternative fuels, its numerous green programs and partnerships, and being the first airline worldwide to voluntarily join the World Bank's IMF Carbon Pricing Leadership Coalition. For more information, please visit: www.aircanada.com/media, follow @AirCanada on Twitter and join Air Canada on Facebook.