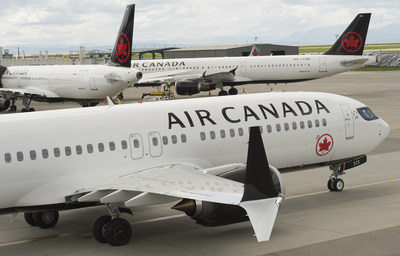 "We are delighted customers are choosing Air Canada in record numbers for their travel plans, where we carried more than 5.2 million customers in a record setting July. With the peak summer season in full force now and heading into the August long weekend, we are expecting to carry more than 178,000 customers today alone. This is a new single day achievement for Air Canada, and it surpasses our previous single day record set earlier this summer," said Benjamin Smith, President, Airlines and Chief Operating Officer at Air Canada. "To put this accomplishment into context, it is equivalent to transporting more people living in the entire city of Saguenay, QC, or in the area of Abbotsford-Mission, BC or in the whole province of Prince Edward Island -- all in one day.

"We look forward to welcoming our customers onboard, and I thank our 30,000 employees for their professionalism and care in transporting people safely to their destinations during this busy travel season," concluded Mr. Smith.

About Air Canada
Air Canada is Canada's largest domestic and international airline serving more than 220 airports on six continents. Canada's flag carrier is among the 20 largest airlines in the world and in 2017 served more than 48 million customers.  Air Canada provides scheduled passenger service directly to 64 airports in Canada, 59 in the United States and 98 in Europe, the Middle East, Africa, Asia, Australia, the Caribbean, Mexico, Central America and South America. Air Canada is a founding member of Star Alliance, the world's most comprehensive air transportation network serving 1,317 airports in 193 countries. Air Canada is the only international network carrier in North America to receive a Four-Star ranking according to independent U.K. research firm Skytrax, which also named Air Canada the 2018 Best Airline in North America.  Air Canada was also named the 2018 Eco-Airline of the Year by the respected airline industry publication Air Transport World in its 44th Annual Airline Industry Achievement Awards for its commitment to emissions reductions through supporting the development of alternative fuels, its numerous green programs and partnerships, and being the first airline worldwide to voluntarily join the World Bank's IMF Carbon Pricing Leadership Coalition. For more information, please visit: www.aircanada.com/media, follow @AirCanada on Twitter and join Air Canada on Facebook.