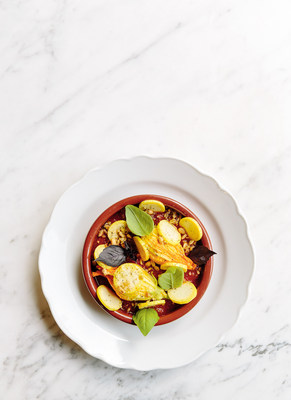 TORONTO, Aug. 9, 2018 /CNW Telbec/ - Air Canada is proud to present the 30 nominees for Canada's Best New Restaurants presented by American Express. The highly anticipated longlist, drawn from a coast-to-coast culinary exploration, is out today on CanadasBestNewRestaurants.com.

From an Italian-inflected seafood menu in a beachy Halifax room to the wildly creative charcuterie cabinet of a French bistro in Victoria, this year's finalists celebrate the delectable diversity of Canadian cuisine. Based on the recommendations from a panel of food experts, Air Canada sends one writer on an anonymous, month-long, cross-country dining marathon to determine the most notable new openings that become contenders for the coveted annual Top 10 list.

"For over 15 years, Air Canada has been committed to discovering the latest Canadian culinary innovations and dining destinations, and celebrating the central role they play in our customers' travel experience," says Andy Shibata, Managing Director, Brand, Air Canada. "This year, we want to celebrate diversity in Canada's culinary culture and highlight chefs and restaurateurs with global backgrounds. Their achievements will be honoured and featured online and in Air Canada's enRoute onboard magazine."

"Our Cardmembers are passionate about food and look to us to point them towards the country's best restaurants and chefs," says David Barnes, VP of Advertising and Communications, American Express Canada. "That's why it's a natural fit for us to pair with Air Canada and sponsor Canada's Best New Restaurants for the fourth year running. We're so excited about the contenders on this list this year."

The 2018 nominees for Canada's Best New Restaurants are:

Canada's Best New Restaurants 2018 highlights the top restaurants that have launched across the country over the last 12 months and deliver memorable experiences through the quality of their food, level of service and original contribution to the Canadian dining landscape.

The annual Top 10 ranking will be unveiled at a celebration in Toronto on October 25, 2018. Tickets for this event go on sale August 24, 2018, giving diners an opportunity to sample Canada's Best New Restaurants all in one place. The winners will also be showcased on CanadasBestNewRestaurants.com and in the November issue of Air Canada enRoute magazine.

About Air Canada
Air Canada is Canada's largest domestic and international airline serving more than 220 airports on six continents.  Canada's flag carrier is among the 20 largest airlines in the world and in 2017 served more than 48 million customers.  Air Canada provides scheduled passenger service directly to 64 airports in Canada, 59 in the United States and 98 in Europe, the Middle East, Africa, Asia, Australia, the Caribbean, Mexico, Central America and South America. Air Canada is a founding member of Star Alliance, the world's most comprehensive air transportation network serving 1,317 airports in 193 countries.  Air Canada is the only international network carrier in North America to receive a Four-Star ranking according to independent U.K. research firm Skytrax, which also named Air Canada the 2018 Best Airline in North America.  Air Canada was also named the 2018 Eco-Airline of the Year by the respected airline industry publication Air Transport World in its 44th Annual Airline Industry Achievement Awards for its commitment to emissions reductions through supporting the development of alternative fuels, its numerous green programs and partnerships, and being the first airline worldwide to voluntarily join the World Bank's IMF Carbon Pricing Leadership Coalition. For more information, please visit: www.aircanada.com/media, follow @AirCanada on Twitter and join Air Canada on Facebook.

About American Express in Canada
American Express is a global services company, providing customers with access to products, insights and experiences that enrich lives and build business success. American Express was established in Canada in 1853 and offers a variety of consumer and business products. Learn more at americanexpress.ca and connect with us on Facebook, Twitter and YouTube.