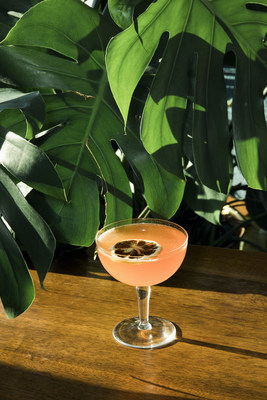 The Big Lift cocktail from The Watch That Ends the Night contains two kinds of rum and Nova Scotia honey. (CNW Group/Air Canada)

TORONTO, Oct. 1, 2018 /CNW Telbec/ - In the spirit of its wildly popular Canada's Best New Restaurants, Air Canada is thrilled to launch Canada's Best New Bars, presented by American Express. With its first-ever Top 10 list, the airline shines a spotlight on the country's best places to grab a pint, sip a pinot and toast a martini.

From a Havana-conjuring tropical hangout on Vancouver's Main Street to a sleek, mid-century drinking den near the Dartmouth waterfront, the best new bars from coast to coast are as varied as the country itself. Based on recommendations from a panel of bartenders, chefs, sommeliers, mixologists and industry experts, Air Canada sent one writer on an anonymous, month-long, cross-country crawl to track down the nation's greatest new places to drink.

"Air Canada wanted a way to celebrate the creativity in the Canadian bar scene and its contribution to our local, regional and national culture," says Andy Shibata, Managing Director, Brand, Air Canada. "The mixologists and sommeliers at these bars are creating incredible cocktails and wine lists featuring local offerings mixed with inspiring additions from around the globe."

"We're proud to partner with Air Canada and introduce Canada's Best New Bars to both our Cardmembers and the rest of the country," says David Barnes, VP of Advertising and Communications, American Express Canada. "This inaugural list showcases an exceptional variety of bars and continues to keep our Cardmembers on the pulse of Canada's newest and hottest establishments."

This year's lineup for Canada's Best New Bars 2018 represent and celebrate diversity in Canadian bar culture. The list features bars that have launched across the country over the last 12 months and highlights the quality of drinks, along with the bars' ambiance and customer experience. The Top 10 for Canada's Best New Bars and their accomplishments will be featured in the October issue of Air Canada's enRoute onboard magazine. In addition, a selection of the Top 10 bars will be showcased at Canada's Best New Restaurants celebration on October 25, 2018.

About Air Canada
Air Canada is Canada's largest domestic and international airline serving more than 220 airports on six continents. Canada's flag carrier is among the 20 largest airlines in the world and in 2017 served more than 48 million customers. Air Canada provides scheduled passenger service directly to 64 airports in Canada, 59 in the United States and 98 in Europe, the Middle East, Africa, Asia, Australia, the Caribbean, Mexico, Central America and South America. Air Canada is a founding member of Star Alliance, the world's most comprehensive air transportation network serving 1,317 airports in 193 countries. Air Canada is the only international network carrier in North America to receive a Four-Star ranking according to independent U.K. research firm Skytrax, which also named Air Canada the 2018 Best Airline in North America. Air Canada was also named the 2018 Eco-Airline of the Year by the respected airline industry publication Air Transport World in its 44th Annual Airline Industry Achievement Awards for its commitment to emissions reductions through supporting the development of alternative fuels, its numerous green programs and partnerships, and being the first airline worldwide to voluntarily join the World Bank's IMF Carbon Pricing Leadership Coalition. For more information, please visit: www.aircanada.com/media, follow @AirCanada on Twitter and join Air Canada on Facebook.

About American Express in Canada
American Express is a global services company, providing customers with access to products, insights and experiences that enrich lives and build business success. American Express was established in Canada in 1853 and offers a variety of consumer and business products. Learn more at americanexpress.ca and connect with us on Facebook, Twitter and YouTube.

For further information: Isabelle Arthur, (Montréal), Isabelle.arthur@aircanada.ca, 514 422-5788; Peter Fitzpatrick, (Toronto), peter.fitzpatrick@aircanada.ca, 416 263-5576; Angela Mah, (Vancouver), angela.mah@aircanada.ca, 604 270-5741; Internet: aircanada.com
We have detected a device type and/or operating system version that may result in slow performance on this site. If you are experiencing problems, please try our mobile app Opens in a new windowExternal site which may not meet accessibility guidelines..