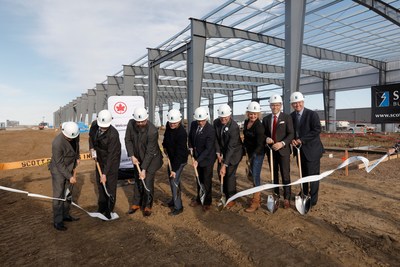 Air Canada and its partners held a ceremony in Edmonton today to highlight construction of a new facility for Air Canada Cargo and Ground Services Equipment. (CNW Group/Air Canada)

The 50,000 square foot (4,645 square metres) building will be constructed by Terracap Group. Air Canada has signed a 15-year lease for the multi-tenant facility, representing an investment of $19 million by the airline over the term of the lease.

"We look forward to this new facility at Edmonton International Airport which will support two of our important operations comprising ground support services and cargo.  The new building means our Edmonton ground support equipment team can continue ensuring the approximately 167 vehicles and motorized ground support equipment Air Canada operate at the Edmonton International Airport are maintained to the highest safety, environmental and operational standards in a modern facility," stated Kevin Howlett, Senior Vice President, Regional Markets & Government Relations.  "Additionally, Air Canada Cargo has significant business in Alberta and Western Canada, and with air freight and logistics being a rapidly growing sector, we have a strong focus on infrastructure improvement across our network.  Our goal is to provide world-class service and a brand-new facility goes a long way in creating an enhanced experience for our customers and for our employees."

The new facility will include five spacious maintenance bays to facilitate the upkeep of Air Canada's approximately 167 airport vehicles in use at Edmonton International Airport, comprising pushback tugs to bag tractors and other vehicles. The building has separate, dedicated areas for maintaining an ever-increasing fleet of baggage carts and container dollies, as well as for welding and machining operations and enables equipment painting year-round regardless of the season.  Other features include a dedicated area for electricians to carry out specialized electrical repairs and a training room that will support continuous learning by keeping mechanics current with the latest technology. Air Canada will continue to meet environmental requirements efficiently through a dedicated area to effectively handle hazardous materials.

The new building will also provide modern, upgraded facilities for Air Canada Cargo which will enable the integration of technology infrastructure and enhanced space usage for the optimal flow of goods. In 2017, Air Canada Cargo handled 3.2 million kilograms of goods, including pharmaceuticals, mail, art, and oil and gas industry equipment through its Edmonton cargo facility.

"By growing its investment at the Edmonton International Airport, Air Canada is demonstrating confidence in the Edmonton Metropolitan Region and its competitiveness as part of the airline's extensive global network," said Don Iveson, Mayor of Edmonton

"The Terracap Group of Companies prides itself on its relationship with great tenants, so we are more than fortunate to be able to construct a new state-of-the-art building for Air Canada. The airline has been such an integral part of the airline industry in Canada, so we are very proud to be a part of such a great initiative at the Edmonton International Airport and look forward to building on the relationship with Air Canada and the team at the Edmonton International Airport," said Larry Krauss, President and CEO of the Terracap Group of Companies.

This fall from Edmonton, Air Canada will offer more than 290 flights each week (up to 44 daily flights) to 12 destinations (14 in winter) in North America, including one daily flight to Las Vegas which will launch on October 28, and the daily non-stop flights to San Francisco which began earlier this year. The carrier will offer an average of 1,770 additional seats per week from Edmonton International Airport this fall and winter, when compared to the same period last year.