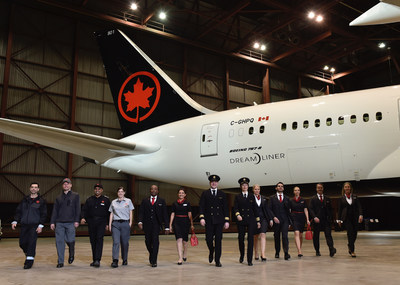 "We are very proud to be ranked one of Canada's top employers for the sixth straight year. This is a testament to the strong engagement of Air Canada's 32,000 employees, which is absolutely essential to delivering excellent service to the 48 million customers we carry each year," said Arielle Meloul-Wechsler, Senior Vice President, People and Culture, at Air Canada. "Being consistently recognized as one of Canada's Top 100 employers is also further evidence of the successful transformation of Air Canada. We have made culture a core priority and this has been instrumental in earning us a place among the leading global carriers."

Mediacorp cited several unique employee support and engagement programs at Air Canada. These include: state-of-the-art training facilities; programs to promote health, fitness and wellness; generous benefits and perks for employees and their families and a consultative approach to workplace developments, such as recent head office renovations where Air Canada sought employee feedback on everything from storage space design to the final décor.

Air Canada's reputation as one of Canada's Top 100 employers has made the airline a destination of choice for people seeking a challenging career. It receives 23,000 visits each month to the employment page of its website and on average there are 340 applicants per position for each vacancy filled. In 2018 alone, Air Canada has hired more than 5,700 people.

In addition to being named one of the Top 100 Employers in Canada (2019), Air Canada has received other recognitions for employee engagement in 2018 including:

Air Canada is Canada's largest domestic and international airline serving more than 200 airports on six continents.  Canada's flag carrier is among the 20 largest airlines in the world and in 2017 served more than 48 million customers.  Air Canada provides scheduled passenger service directly to 63 airports in Canada, 56 in the United States and 98 in Europe, the Middle East, Africa, Asia, Australia, the Caribbean, Mexico, Central America and South America. Air Canada is a founding member of Star Alliance, the world's most comprehensive air transportation network serving 1,317 airports in 193 countries.  Air Canada is the only international network carrier in North America to receive a Four-Star ranking according to independent U.K. research firm Skytrax. In 2018 Canada was voted the Best Airline in North America in the Skytrax World Airline Awards and it was also named the Eco-Airline of the Year by Air Transport World.  For more information, please visit: aircanada.com/media, follow @AirCanada on Twitter and join Air Canada on Facebook.