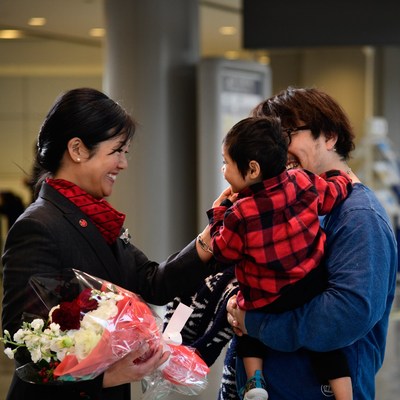 MONTREAL, Dec. 14, 2018 /CNW Telbec/ - Once again this year Air Canada is making traveller's homecomings memorable around the world. Reunions were a little sweeter, hugs were a little tighter and smiles were a little wider at arrival gates this holiday season thanks to surprise pop-up boutiques from Air Canada in Toronto, Vancouver, Montreal, Washington and Tokyo airports. Air Canada pilots and flight attendants offered gifts, including giant teddy bears, balloons and flowers to arriving customers on select flights. Some lucky travellers were also surprised with free tickets to help shorten the time between visits with their family and friends.

"Coming home for the holidays is an emotional and personal experience for many of us, full of the excitement and anticipation that come from reunions with loved ones," says Andy Shibata, Managing Director, Brand at Air Canada. "No matter if home is here in Canada or abroad, it's our honour to fly our Customers home for the holidays and reunite them with friends and family."

This is the latest of a larger campaign Air Canada launched last year to celebrate the feeling of "Home". Roundtrip tickets were given away to those who visited the arrival gate boutiques, and on Air Canada's social media channels where members of the community were asked to share a story of someone they want to bring home for the holidays.

"Our hope is to spread the feeling of 'Home', where ever their home may be, to as many travellers as we can," added Shibata.

Air Canada is Canada's largest domestic and international airline serving more than 200 airports on six continents.  Canada's flag carrier is among the 20 largest airlines in the world and in 2017 served more than 48 million customers.  Air Canada provides scheduled passenger service directly to 63 airports in Canada, 56 in the United States and 98 in Europe, the Middle East, Africa, Asia, Australia, the Caribbean, Mexico, Central America and South America. Air Canada is a founding member of Star Alliance, the world's most comprehensive air transportation network serving 1,317 airports in 193 countries.  Air Canada is the only international network carrier in North America to receive a Four-Star ranking according to independent U.K. research firm Skytrax. In 2018 Canada was voted the Best Airline in North America in the Skytrax World Airline Awards and it was also named the Eco-Airline of the Year by Air Transport World.  For more information, please visit: aircanada.com/media, follow @AirCanada on Twitter and join Air Canada on Facebook.