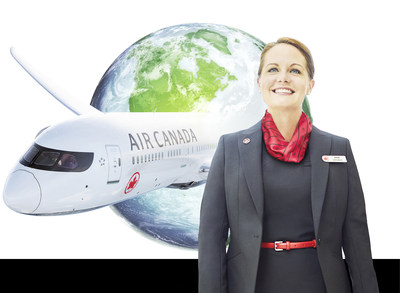 Report details progress on safety, the environment, people and communities

MONTREAL, June 3, 2019 /CNW Telbec/ - Air Canada today issued Citizens of the World, its 2018 corporate sustainability report. The report, available online at www.aircanada.com/citizensoftheworld, details the airline's progress in key areas of sustainability and is supported by an extensive table of performance indicators in accordance with the principles of the Global Reporting Initiative.

"Real sustainability requires accountability. For this reason, since 2011 Air Canada has issued public sustainability reports that describe our activities in the areas of safety, the environment, our people and local communities. We believe that in business, you do well by doing good and, at Air Canada, we take this very much to heart as our experience has shown that that is how our airline truly thrives," said Arielle Meloul-Wechsler, Senior Vice President of People, Culture and Communication at Air Canada.

"As the report describes, we had significant achievements with respect to all of our sustainability programs in 2018, most notably being named the Eco-Airline of the Year in a global award competition. But more than this, the report also sets new goals for the current year so that our progress can be tracked for greater accountability in the future."

For the 2018 report, Air Canada undertook an extensive materiality assessment of stakeholders, including customers, employees, suppliers and investors to identify the sustainability issues that matter most to them. As well, the airline obtained third-party validation of select metrics to ensure the integrity of its reporting.

Among its key sustainability accomplishments in 2018, Air Canada