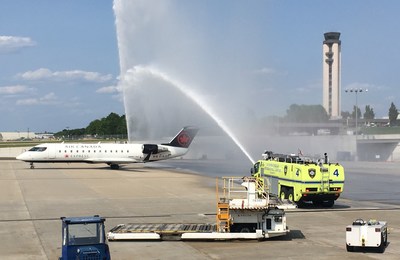 "Air Canada's strategic global expansion continues with the launch of Montreal-Raleigh, the 25th transborder route from our Montreal hub, connecting the southern charm of North Carolina and French flavor of Quebec. This new route complements our existing year-round service to North Carolina consisting of flights from Toronto to Raleigh and Charlotte, which also benefits from increased capacity in 2019," said Mark Galardo, Vice President, Network Planning, at Air Canada. "With expansion into 29 new markets since the beginning of 2016, our Montreal hub offers convenient non-stop connections to than 98 destinations in our global network. Customers returning to Raleigh from an international destination through Canada pre-clear U.S. customs without even picking up their baggage if they are connecting, saving significant time on their journey. For eligible premium customers flying onward internationally from Montreal in Air Canada Signature Class, we offer an exclusive Air Canada Maple Leaf Lounge to relax in and enjoy before continuing onwards internationally."

The new Montreal-Raleigh service is the only non-stop flight between these cities. While always a popular leisure destination, North Carolina is also experiencing strong economic growth and Air Canada is making it more convenient and comfortable for customers to travel between Canada and the state.

For further information: Isabelle Arthur (Montreal), Isabelle.arthur@aircanada.ca, 514 422-5788; Peter Fitzpatrick (Toronto), peter.fitzpatrick@aircanada.ca, 416 263-5576; Angela Mah (Vancouver), angela.mah@aircanada.ca, 604 270-5741
We have detected a device type and/or operating system version that may result in slow performance on this site. If you are experiencing problems, please try our mobile app Opens in a new windowExternal site which may not meet accessibility guidelines..