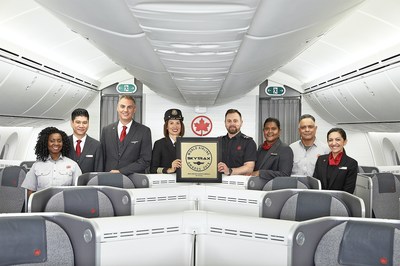 "I am very proud that Air Canada has been recognized as the Best Airline in North America for the third straight year and eighth time in ten years. The Skytrax World Airline Awards are global, highly regarded recognitions. Our continued success winning these awards shows we have truly transformed Air Canada into a leading global carrier focused on a superior product offering and customer service excellence. I commend our 33,000 award winning employees whose hard work transporting our customers safely and comfortably has awarded us best airline staff in Canada and is enabling us to compete effectively against some of the largest airlines in the world," said Calin Rovinescu, President and Chief Executive Officer of Air Canada.

"We also thank our customers for their loyalty and for recognizing our efforts. The fact Air Canada has been repeatedly voted the Best Airline in North America underscores our commitment to continue enhancing all aspects of the travel experience. This includes such innovations as upgrades to our in-flight entertainment systems, the introduction of onboard Wi-fi, new and refurbished lounges, streamlined airport processes, our narrow-body fleet renewal program, a new reservation system to vastly improve bookings management and, next year, a new loyalty program that we aim to make the industry's best."

The Star Alliance, of which Air Canada is a founding member, was also named world's best airline alliance by Skytrax.

"Air Canada's achievement of being named the Best Airline in North America for the eighth time is a remarkable achievement, and it is a fitting tribute for all Air Canada staff that they continue to receive such a vote of confidence from customers. We are also delighted to see Air Canada Signature Suite in Toronto Pearson Airport recognised as the World's Best Business Class Dining Experience," said Edward Plaisted, CEO of Skytrax.

About the Skytrax World Airline Awards

The World Airline Awards are independent and impartial, introduced in 1999 to provide a customer satisfaction study that was truly global. Travellers across the world vote in the largest airline passenger satisfaction survey to decide the award winners. The awards are referred to by media around the world as "the Oscars of the aviation industry". Skytrax pays all costs of the Survey and Awards event, and airlines do not pay any entry or registration fee. The awards event and award presentations are supplied by Skytrax at no charge. There are no fees or costs for airline use of the award logos and results.  Over 100 customer nationalities participated in the survey with 21.65 million eligible entries counted in the results. Survey entries were screened to identify IP and user information, with duplicate, suspect or ineligible entries deleted. More than 300 airlines are featured. The online survey operated from September 2018 to May 2019, together with invitations sent to previous year respondents in the Skytrax survey database. The customer survey was operated in English, French, Spanish, Russian, Japanese and Chinese. On a year-to-year basis, the most substantial increases were noted in customer voting across the Chinese and Spanish language surveys.