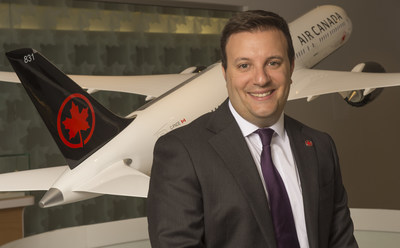 MONTREAL, June 26, 2019 /CNW Telbec/ - Air Canada wishes to congratulate Mark Galardo, Vice President, Network Planning at Air Canada on his deserving nomination today as one of Canada's Top 40 Under 40 for 2019, a recognition of exceptional achievements of 40 outstanding Canadians under the age of 40.

With 15 years of experience at Air Canada, Mark is a key member of the leadership at the airline's Montreal headquarters, overseeing the development and performance of Air Canada's globe-spanning network that consists of more than 1,500 daily flights to nearly 220 destinations.

"I am thrilled to see Mark's achievements recognized with this honour. His passion and skills contributed to the growth of our network and expanded our global reach, which has been fundamental to the successful transformation of our airline. He is a very talented, motivated and capable leader who can clearly articulate and share his vision, as well as mobilize others to ensure our goals were achieved. Mark is able to view issues from the from the perspective of our company, our employees and our customers, ensuring that our decisions are rooted in the considerations of our social responsibilities," said Arielle Meloul-Wechsler, Senior Vice President, People, Culture and Communications at Air Canada.

With Mark's guidance, Air Canada has launched 60 new routes in the last two years and he has overseen the resurgence of Montreal as a key hub for the airline, where capacity has increased nearly 80% in the last five years.  He helped institute direct flights from Montreal to international destinations like Tokyo, Shanghai, Beijing, Tel-Aviv, Lyon, Lisbon and, starting in December, to Sao Paolo.

Later this year, we will welcome the Airbus A220-300 to our fleet and that is, in large part, thanks to Mark's evaluation of the aircraft and the many benefits it will have for customers and the airline.

Mark was selected from over 850 nominees by an independent Advisory Board, comprising 25 business leaders from across Canada. Honourees were chosen on four key criteria: Vision & Innovation; Leadership; Impact & Influence; and, Social Responsibility.

As a mentor in the Leading the Air Canada Way program, Mark shares his knowledge with employees to help bridge the gap for future leaders. He has coached many young colleagues within network planning so they will be prepared to assume leadership roles within the company. Mark is also involved in a number of community initiatives and charities, donating both his time and helping raise money for various groups such as Hockey Helps the Homeless and the Ride to Conquer Cancer.

Founded in 1995 by Caldwell, Top 40 has recognized more than 720 outstanding Canadians and is the country's most coveted award for young business leaders. Honourees have a remarkable track record of achievement after their win; the ranks of Top 40 alumni include hundreds of nationally and internationally prominent CEOs, CFOs, executives, and entrepreneurs.