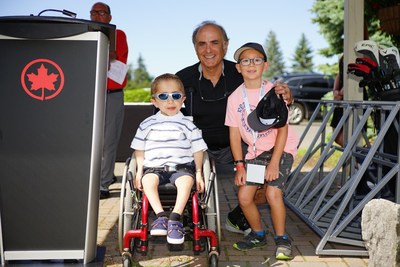 MONTREAL, July 10, 2019 /CNW Telbec/ - The Air Canada Foundation raised a record-breaking $1.2M during the eighth edition of its annual golf tournament. For the fifth consecutive year, the Foundation raised over $1M in support of charitable organizations dedicated to the health and well-being of children and youth in Canada. Held at the Saint-Raphaël Golf Club on Monday, July 8, the event welcomed approximately 350 attendees from over 100 Canadian, U.S. and international corporations and organizations.

"Thanks to the overwhelming generosity of Air Canada's partners and friends, the eighth annual Air Canada Foundation golf tournament raised a record-breaking net amount of $1.2 million," said Priscille LeBlanc, Chair of the Air Canada Foundation. "The tireless work of several Air Canada employee volunteers who helped organize and facilitate the event was once again key to ensuring the tournament's great success. Over the past eight years, and with the unwavering support of Air Canada, its employees and its partners, the Foundation has made a positive difference in the lives of thousands of children across Canada. I extend a heartfelt thank you on behalf of all the children and families whose lives are touched by the Foundation."

The Air Canada Foundation was pleased to once again welcome Amadeus as Presenting Partner of this year's event. Patrons of Honour and Gold sponsors were:

Stone and Kaleb, two young boys who previously benefited from the support of the Foundation, played an important role by manning the highly coveted lemonade stand. Together, they raised a record-breaking amount of $15,630 as they enticed golfers with their refreshing lemonade on a warm, sunny day.

In 2018 alone, the Air Canada Foundation granted over $5.4 million in financial and in-kind support to 275 Canadian registered charities and helped over 450 fundraising events and initiatives.

One organization that benefited from the Air Canada Foundation's support last year is Dreams Take Flight, an employee-led charity that Air Canada has supported since its very beginning, over 30 years ago. Each year, the airline provides flights from Halifax (NS), Montreal (QC), Ottawa (ON), Toronto (ON), Winnipeg (MB), Edmonton and Calgary (AB), and Vancouver (BC) that bring 1,000 medically, mentally, physically, socially or emotionally challenged children to Disney for a fun-filled day of activities.

The Breakfast Club of Canada received $148,000 to sustain three Indigenous schools by covering food and kitchen equipment purchases in Indigenous communities throughout the country. They will also use the funds to develop two programs in the Northwest Territories and Yukon.

The 14 Canadian pediatric member hospitals of the Children's Miracle Network received a total of $871,398 to help support the two million children they serve every year, including the second installment of a five-year, $250,000 commitment to the new Jim Pattison Children's Hospital, for state-of-the-art equipment and facilities for children, mothers and families in Saskatoon.

Further to its annual golf tournament, the Air Canada Foundation raises funds through a number of initiatives, including the Wanderluxe Gala and Every Bit Counts, an on-board collection program that facilitates the donation of currency of any denomination on Air Canada flights or through collection containers available at Air Canada Maple Leaf Lounges. In 2019, all proceeds collected on board will be distributed to all 14 pediatric member hospitals of the Children's Miracle Network.

About the Air Canada Foundation

The Air Canada Foundation, a not-for-profit organization focused on the health and well-being of children and youth, was launched in 2012. It offers both financial and in-kind support to Canadian registered charities. Core programs include the Hospital Transportation Program, which donates Aeroplan Miles to 15 pediatric hospitals across Canada, enabling sick children to access the medical care they need but which are unavailable locally. The Air Canada Foundation, in collaboration with the airline, also engages directly in fundraising activities, such as the Every Bit Counts program, which encourages Air Canada and Air Canada Rouge customers to donate loose change of all denominations aboard flights or through collection containers available in Air Canada Maple Leaf Lounges. The Foundation also offers continued support to major health-related causes that benefit Canadians and is an active participant in international humanitarian relief activity as the need arises. For more information about the Air Canada Foundation, please visit www.aircanada.com/foundation or the 2018 Corporate Sustainability Report, Citizens of the World, online at www.aircanada.com/citizensoftheworld.