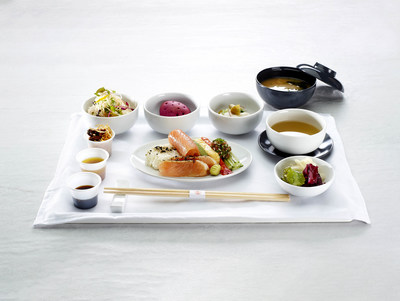 "We're thrilled to continue showcasing the very best of Canadian talent with Chef Park joining our team of celebrated Chefs. Apart from elevating our customers' dining experience with destination inspired creations on Asian and South American flights, we chose to partner with Chef Park due to his passion for promoting the Canadian culinary scene and his appreciation for fresh ingredients and sustainability," said Andrew Yiu, Vice President, Product at Air Canada. "We look forward to presenting Chef Park's unique culinary creations to customers travelling to Tokyo-Narita from Montreal in our Air Canada Signature Service, Premium Economy and Economy cabins."

"It's a blessing and an honour to partner with Air Canada. I'm extremely proud and humbled to be sharing my food with Air Canada's customers flying at 30,000 feet beginning with the Montreal to Tokyo-Narita flight. It is the perfect opportunity to use Canadian ingredients and Japanese techniques, marrying the two to enhance the on-board experience," said Chef Antonio Park. "The future of this world is education and you have to share your knowledge. This is a new chapter for the PARK restaurant family and myself. Thank you, Air Canada, for making a dream come true. Bon Appétit!"

Roll-out of Chef Park's menu starts with meals on board flights between Montreal and Tokyo-Narita today followed by flights from Toronto to Tokyo-Haneda, Vancouver to Tokyo-Narita, and flights from Montreal to Sao Paulo this Fall. In 2020, Chef Park's meals will also be available on flights to Hong Kong, Seoul, Beijing, Shanghai, Taipei, Sao Paulo (from Toronto), Santiago and Buenos Aires, and seasonal flights from Calgary to Tokyo-Narita and Vancouver to Osaka. Chef Park's options will be available in Signature, Premium Economy and Economy Class on all flights from Canada to Japan and exclusively in Signature Class on all other flights departing Canada to Asia and South America, in addition to options created by Chef Hawksworth.

The vision Chef Antonio Park brings to Air Canada is inspired by his culinary journey, beginning with his Korean mother's kitchen while growing up in Argentina, his training under revered Japanese cooking masters, and his decorated accomplishments as one of Canada's top celebrity Chefs. His meals will embody his experience as a Canadian who has come from afar to make this country his home while respecting the local character of the food he serves.

Chef Park began cooking from a young age in his mother's kitchen in Argentina. Inspired by his mom creating everything from scratch, and working with the freshest ingredients, he developed a drive for perfection, and an appreciation for sustainability and farm-to-table cooking. This foundation carried Chef Park through his culinary journey from his first job as a dishwasher to training under Japan's most revered cooking masters.

Chef Park worked in Japan, New York, Toronto, and Montreal before opening his first restaurant, Park, in Montreal in 2012. Chef Park has won many awards in Canada and has been recognized multiple times as "Chef of the Year." Park has been recognized by the World's 50 Best and ranked in the top 10/20 on Canada's 100 Best list in consecutive years. After establishing his first restaurants, Chef Park could be found as a judge on Food Network Canada's Chopped, and as a guest judge on Top Chef Canada. Chef Park strives to promote the Canadian culinary scene by working with Chefs across the country.

Air Canada is Canada's largest domestic and international airline serving more than 220 airports on six continents. Canada's flag carrier is among the 20 largest airlines in the world and in 2018 served nearly 51 million customers. Air Canada provides scheduled passenger service directly to 62 airports in Canada, 54 in the United States and 100 in Europe, the Middle East, Africa, Asia, Australia, the Caribbean, Mexico, Central America and South America. Air Canada is a founding member of Star Alliance, the world's most comprehensive air transportation network serving 1,317 airports in 193 countries. Air Canada is the only international network carrier in North America to receive a Four-Star ranking according to independent U.K. research firm Skytrax, which also named Air Canada the 2019 Best Airline in North America. For more information, please visit: aircanada.com/media, follow @AirCanada on Twitter and join Air Canada on Facebook.