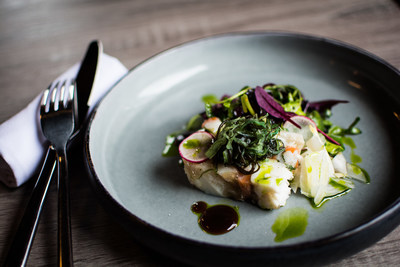 TORONTO, Aug. 8, 2019 /CNW Telbec/ - Air Canada is proud to present the 35 nominees for Canada's Best New Restaurants presented by American Express. The highly anticipated longlist, drawn from a coast-to-coast culinary exploration, is out today on CanadasBestNewRestaurants.com.

From a Nordic-Japanese tasting menu offered in a Thornhill, Ontario, strip mall to an elevated oyster house in Whitehorse to a plant-forward spot called Nowhere *A Restaurant in Victoria, this year's expanded list of finalists celebrates the best that Canada's creative and ingenious food scene has to offer. Based on the recommendations of a diverse new panel of food experts from coast to coast, Air Canada sent one writer on an anonymous, month-long, cross-country dining marathon to determine the notable new openings that became contenders for the coveted annual Top 10 list.

"Air Canada has explored the country every year for over 15 years and is committed to uncovering the stories behind culinary innovators and dining destinations, while celebrating the central role they play in our customers' travel experiences," says Andy Shibata, Managing Director, Brand, Air Canada. "Reflecting the high calibre of new restaurant openings in Canada this year, we are proud to announce that we have 35 nominees on our 2019 longlist instead of 30. We want to celebrate the distinguished talent that is the foundation of Canada's culinary culture, and feature the chefs and restaurateurs who deliver international flavours to Canadians. Their achievements will be honoured and featured online and onboard in our magazine Air Canada enRoute."

"Our partnership with Air Canada and Canada's Best New Restaurants is in its fifth year and is a perfect fit for us," says David Barnes, VP of Advertising and Communications, American Express Canada. "Our cardmembers are eager to learn about and experience what's new in Canada's restaurant and culinary scenes."

Canada's Best New Restaurants 2019 highlights the top restaurants that have opened across the country over the last 12 months and deliver exceptional experiences through the quality of their food, level of service and commitment to culinary creativity.

The annual Top 10 ranking will be unveiled at a celebration in Toronto on October 24, 2019. The winners will also be showcased on CanadasBestNewRestaurants.com and in the November issue of Air Canada enRoute magazine.

About American Express in Canada:
American Express is a global services company, providing customers with access to products, insights and experiences that enrich lives and build business success. American Express was established in Canada in 1853 and offers a variety of consumer and business products. Learn more at americanexpress.ca and connect with us on Facebook, Twitter, and YouTube and Instagram