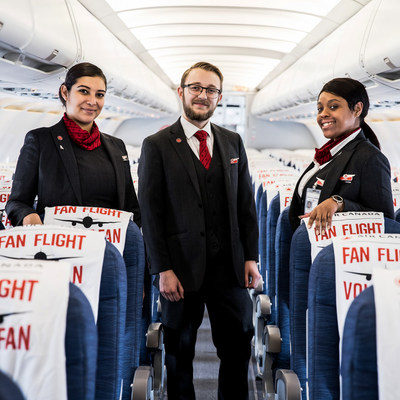 MONTREAL, Oct. 2, 2019 /CNW Telbec/ - As the puck drops on another NHL season and fans from coast to coast cheer for their favourite teams, Air Canada today announced the return of Fan Flight (#ACFanFlight) – a season-long program that rewards deserving fans with a VIP game experience, including the opportunity to see their team play either at home or on the road.

Fan Flight rewards fans in a number of ways, including in-arena giveaways during promo nights and by flying lucky fans to away games. It also recognizes deserving young sports fans, nominated by the Air Canada Foundation, who are making their mark in their communities, giving such Mark Makers the unforgettable experience of watching their favourite team play at home and away games.

"As Canada's flag carrier, official airline of all seven Canadian NHL teams and proud partner of Canada's sole NBA franchise, the Toronto Raptors, Air Canada takes enormous pride in supporting our country's teams," says Andrew Shibata, Managing Director, Brand at Air Canada. "The Fan Flight program provides fans with incredible game experiences and is integral to our commitment as an airline to put the customer at the centre of everything we do."

For its pre-season warm-up, Air Canada undertook a range of exciting activities nationwide for the #BackToHockey season. Last month, the airline surprised and delighted fans at airports with game tickets and gifts, and recognized two lucky fans during pre-season games in Atlantic Canada.  Jonathon Reid from St. John's, Newfoundland and Erik Burke from Miramichi, New Brunswick, will be flying with their families to Toronto and Montreal respectively to attend their favorite team home opener.

To help all hockey fans celebrate the return of their favourite sport, Air Canada is holding a two day seat sale October 2-3, with 15% off base fares to Canadian and worldwide destinations. Terms and conditions apply. Learn more at aircanada.com/backtohockey.

For further information: media@aircanada.ca, aircanada.com
We have detected a device type and/or operating system version that may result in slow performance on this site. If you are experiencing problems, please try our mobile app Opens in a new windowExternal site which may not meet accessibility guidelines..