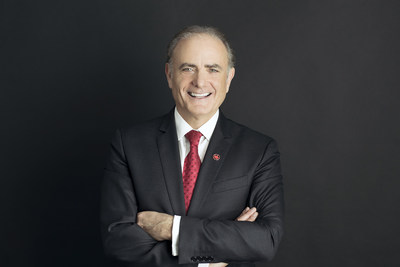 MONTREAL, Nov. 26, 2019 /CNW Telbec/ - Air Canada President and Chief Executive Officer Calin Rovinescu was yesterday named CEO of the Year and Strategist of the Year by the The Globe and Mail's Report on Business Magazine. This is the second time Mr. Rovinescu has been selected as Canada's top CEO by the magazine.

"Calin's formidable foresight and bold vision have guided Air Canada's successful transformation over the past decade. A natural leader, he has instilled an entrepreneurial mindset throughout the organization while at the same time executing upon key strategic decisions to unlock the airline's potential so that today it is a recognized Canadian global champion. The Air Canada Board congratulates Calin on being honoured as CEO of the Year for a second time and as Strategist of the Year by Canada's leading national business publication," said Vagn Sørensen, Chair of the Board of Directors, Air Canada.

Mr. Rovinescu has served as President and Chief Executive Officer of Air Canada since April 1, 2009. Among the many recognitions for his business accomplishments, he was awarded the Executive Leadership Award at the 2018 Airline Strategy Awards, named Canada's Outstanding CEO of the Year (2016) and Canada's Best CEO (2013). He is a member of the Board of Directors of BCE Inc. and Bell Canada, and of the Business Council of Canada, and is the 14th Chancellor of the University of Ottawa.

For 2019, the Globe and Mail's Report on Business Magazine named five winning leaders representing the best of corporate leadership, strategy, innovation, vision and responsibility with one leader recognized as CEO of the Year.